It’s been almost six weeks since Politico released a leaked draft majority opinion of the Supreme Court voting to strike down the landmark Roe v. Wade decision. This is a devastating blow to reproductive rights, and worse for those in Republican-led states. Although abortion remains technically legal at the moment, already near-total abortion bans are sweeping across the country. That’s why 70 of your favorite beauty and wellness brands came together to take a stand with Don’t Ban Equality.

Don’t Ban Equality actually launched in 2019 in response to restricted access to comprehensive reproductive healthcare, including abortion. More than 330 business leaders have stepped up to say these bans “go against their company values and negatively affect efforts to promote equality in the workplace.” Now Roe faces a real threat and brands came together yet again to say this isn’t OK.

The Guttmacher Institute predicts that at least 26 states are likely to ban abortions as soon as the decision is overturned. 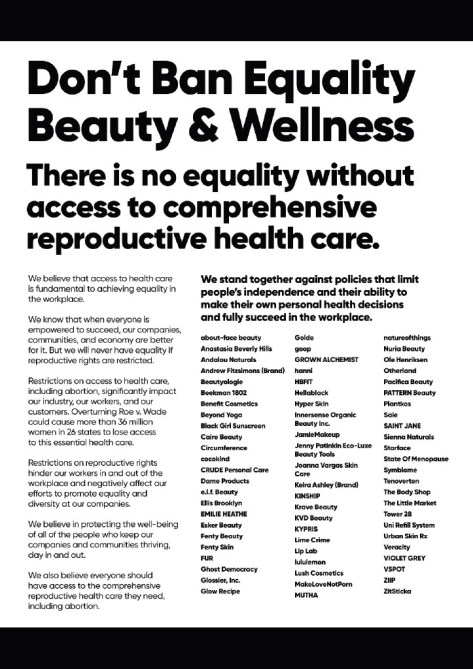 I don’t know about you, but I want to know that who I give my money too alligns with my values. Sure, no corporation is perfect but it matters to me that my fave beauty and wellness brands are taking a stand. These include Glossier, Glow Recipe, E.L.F., Rare Beauty, Fenty Beauty, Lululemon, Pattern Beauty, About-Face and so many more. And I’m not the only one who cares.

According to Greenwald Research, more than half of Gen Z (56 percent) and Millennials (55 percent) would be “more likely to buy from a brand that publicly supported reproductive health care.”

It matters for workers, too. In a poll by PerryUndem, 68 percent of “top talent” say “it’s important to them that their company take a stand on social issues,” while 51 percent say they’d “consider leaving their current job for an employer with a stronger viewpoint on social issues.” Plus, abortion rights are very popular in this country even if a group of loud people make it seem like that’s not the case. According to the Pew Research Center, “a 61 percent majority of U.S. adults say abortion should be legal in all or most cases.” Six in 10 Americans rarely agree on anything.

Head to Don’t Ban Equality to learn more about abortion access by state and join these brands in the fight for equality for all.