Gigi Hadid has been laying low since giving birth to her baby girl Khai in late September. She and partner Zayn Malik have been staying in the Hadid’s country home in Bucks County, PA (weirdly, where I grew up) through quarantine and the model giving birth. Four months later, she’s out and about with a brand-new Vogue cover and a corresponding Beauty Secrets video. I love this series because we get a behind-the-scenes look at what products celebs really use and they’re often ones I love, too. Like Hadid’s favorite Cetaphil cleanser.
You can find a few affordable favorites you might not have tried before.

The model loves a good drugstore staple. “Whenever I’m working a lot, or I’m wearing a lot of makeup, or I’m coming from a shoot, I use Cetaphil because I just feel like it really cleans my skin,” she said in the video. “I’ve always really gone for drugstore skincare…I really just wanted good products and I don’t always think that you have to pay a lot for that.”

Even better, some — including the cleanser — are on sale during Amazon’s 2022 Holiday Beauty Haul. 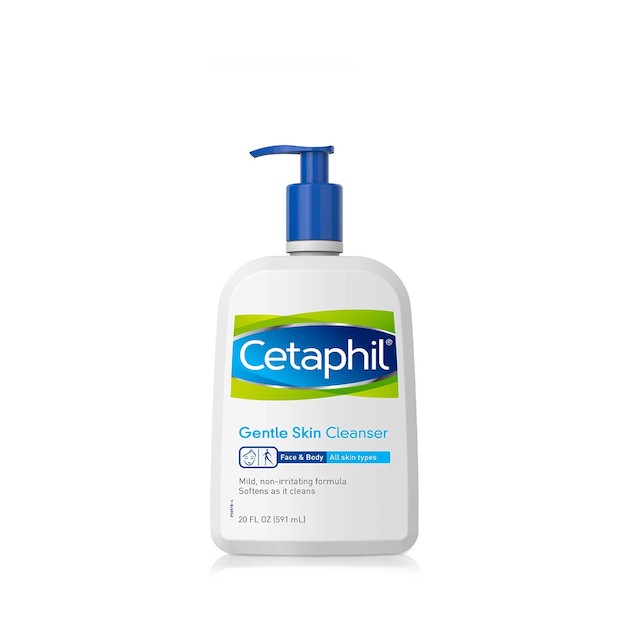 Hadid is right. While I would argue some pricey skincare is worth the money, a lot of it is very similar to what you’ll find on drugstore shelves if you look closely at the ingredients. This cleanser is gentle and fragrance-free so it’s unlikely to irritate even the most sensitive skin. Though she uses it to remove makeup and cleanse in her everyday normal life, Hadid revealed she changed up her skincare a bit while pregnant.

“While I was pregnant, I really moved towards really clean products, natural,” she says. “So I used a brand called Oliveda
and it’s just olive tree extract and they have everything from cleanser to moisturizer, oils. Now that’s in winter and very cold on the East Coast, Hadid has moved onto heavier lotions for dry skin. She’s loving two everyday essentials: Dr. Jart+ Ceramidin Cream ($27.93 at Amazon
) and Odacité Mo+P Very Dry Skin Moringa Petitgrain Serum Concentrate ($46 at Amazon
). Both are incredible for dry and/or chapped skin.

Hadid is also dealing with chapped lips during the winter, so she applies Lano Strawberry 101 Ointment Multi-Balm ($13.50 at Ulta Beauty) and adds a little to the dry parts of her face, too. Now, her skin is ready for makeup. “I really like a base that doesn’t look dry,” she says. “So I like a little bit of a glow. But I obviously don’t wanna look oily, so I’ll kind of show you a mixture that I’ve come up with.”

First, Hadid dots on Charlotte Tilbury Wonderglow Face Primer ($55 at Sephora). Then, she applies Charlotte Tilbury Hollywood Flawless Filter ($46 at Sephora) under her eyes and around her face. The Maybelline spokesmodel then applies the brand’s Fit Me Matte + Poreless Liquid Foundation ($6.59 at Amazon
) and blends them all together with her fingers. Then, it’s time for concealer. “I like to let concealer sit for a little bit because I think that the formula becomes thicker,” she says. Not surprisingly, she reaches for Maybelline Instant Age Rewind Eraser Dark Circle Treatment Concealer ($8.36 at Amazon
).

Next comes brows. She uses the Maybelline TattooStudio Tattoo Brow 36HR Pigment Brow Pencil ($7.58 at Amazon
) to fill in any sparse areas, though she doesn’t have many. “Someone once told me, I can’t remember who, maybe my mom, was just like on set never let anyone pluck your eyebrows,” she says. Hadid favors a fluffy brow so she finishes with Patrick Ta Major Brow Shaping Wax ($24 at Sephora). Read our review of the makeup artist product, here.

Hadid sets her makeup with Maybelline Fit Me Matte + Poreless Powder ($6.59 at Amazon
). She lightly contours her face with Maybelline New York City Bronzer ($7.31 at Amazon
). To keep the neutral vibes going, she applies Maybelline Nudes of New York Eyeshadow Palette ($13.99 at Ulta Beauty) to her lids and up near her brow bone to open her eyes.

“This is strange, but I do mascara then I finish my blush and highlighter because then I like to go back to the mascara, and reapply,” says Hadid. She curls her lashes first with Tweezerman Rose Gold Classic Lash Curler ($16.99 at Amazon
) and applies Maybelline Falsies Lash Lift Mascara ($7.90 at Amazon
). Here’s where she goes back to her face with blush. “I like to smile and start on the apples of my cheeks and then kind of blend it out,” she says, using Stila Convertible Color ($25 at Amazon
).

Finally, Hadid finishes her tutorial with her lips. “I used to be much more of like a matte lipstick person and I feel like I’m appreciating a little sparkle and shine nowadays,” she says. She lines her lips with Patrick Ta Monochrome Moment – Precision Lip Crayon ($26 at Sephora) and fills them in with Maybelline New York Color Sensational Gold Lipstick Metallic Lipstick ($6.49 at Amazon
.) She finishes with a plumping gloss: Maybelline Lifter Gloss With Hyaluronic Acid ($7.52 at Amazon
).

Though Hadid looks gorgeous, she’s quick to admit this isn’t her everyday routine, especially as a new mom. “I know that sometimes I’m not washing my face these days, I don’t brush my hair for a few days,” she says. “So I just wanna remind those of you watching that this is not how I look every day. Sometimes I go a week without touching makeup, or, you know, just putting on deodorant is like, we’re doing great. So, just remind yourself that you’re doing the best you can, you’re doing amazing, and to just give yourself grace. And if you brushed your hair this week, I’m really proud of you.”