If you rely heavily on lip liner to create the appearance of a fuller pout, here’s another option: Lawless Beauty’s Forget The Filler Overnight Lip Plumping Mask. The hydrating balm has easily earned the title of bestseller—its sold out three times at Sephora. While the lip mask loves to play hard to get, the chase is finally over; it’s been restocked on the retailer’s website for the first time since April.

Here’s why you’ll want to get your hands on this transformative magic ASAP: The overnight treatment not only brings a natural-looking, fuller effect to the lips with every application, but also smoothes over fine lines for more youthful looking skin. Three active ingredients are responsible, including the brand’s ‘MaxiLip’ that has been shown through clinical tests to increase lip volume by 40 percent and reduce lip folds by 29 percent. This potent additive is joined by shea butter and hyaluronic acid (an ingredient commonly used in professional lip injectable treatments), both of which hydrate and soften dry patches while leaving bouncier skin behind. 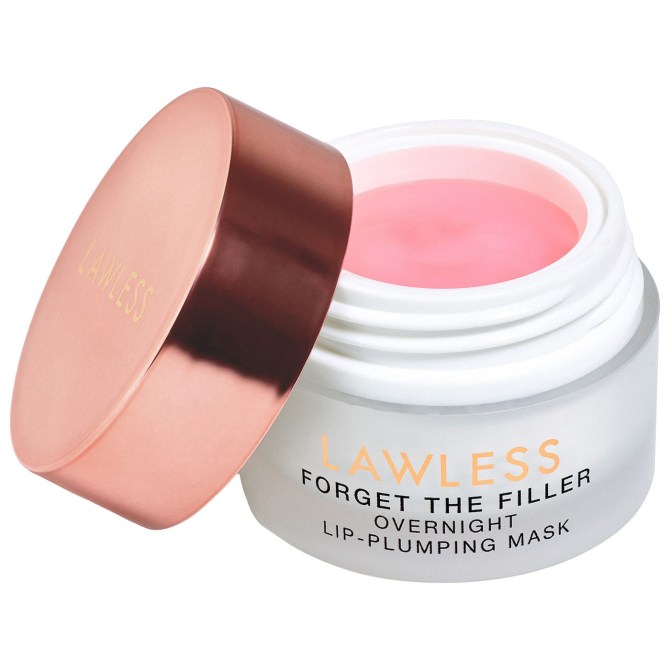 It’s similar to the brand’s OG Forget The Filler Lip Plumper Line Smoothing Gloss many know and love, except with some minor upgrades: The mask features 1,200 percent more shea butter, and 50 percent more MaxiLip, so you’ll wake up to even more visible results than you thought possible.

Take the over 44,000 ‘loves’ from Sephora shoppers as proof—the plumping mask has made some serious waves, with many reporting “noticeably fuller lips” from use.

RELATED: The NuBody Device Is on Sale For Over $100 Off After Selling Out—Here’s How to Get It

“I was skeptical of this one, but have totally fell in love,” wrote one reviewer. “It has a refreshing tingle and makes my lips feel and look smooth and ever so slightly plump, without a full blown lip-plumping action. I like to alternate it with the Laneige lip mask, and often keep this one in my purse for all day use! Cleaner ingredients, great performance = win win!”

Great performance has in fact been clinically proven. Through brand-run research tests, it was reported that 97 percent of users agreed their lips appeared smoother after wearing the mask overnight, while 90 percent claimed they appeared more hydrated.

“I’ve felt my lips slowly shriveling up over the past year and none of the lip masks I’ve tried have helped—even the ones that felt hydrating enough. I tried this lip mask and my lips are plumping up again,” raved a second shopper. “It’s only been a couple of days but I swear my lips are like at least 20% fuller than before. Definitely recommend.”

For those already a fan of the popular lip mask, take note that a cherry vanilla option is coming at the end of the month. And for those who haven’t tried the original yet, make sure you pick it up before it sells out again.